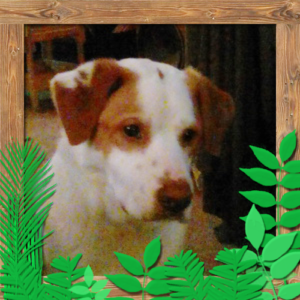 An Angel PawPrint On Baxter's Heart

How I Became BAXTER's Dog Mom:

When I first rescued Baxter from the shelter, it was love at first sight. He was in a cage with his brother. And his
brother was so happy to see everyone, but Baxter hung back in the corner.

When we asked to see Baxter,  the shelter workers had to carry him into the room, and even then he still cowered in the corner.

Before we adopted him, his name was Lightning, but we changed it to Baxter. At the time, we had one other dog named Lila and we were looking for a friend for her.

When we brought him home, Baxter didn't want anything to do with anyone, but Lila. It took him almost a year to come to any of us and then slowly he became my best friend, my baby and my life.

Baxter didn't really play with toys. When we got him a toy, he would never play with it, he would just ignore it. And sometimes he would jump at us and want to play with us instead.

Baxter loved to travel with us. One of our favorite places to go was to the Mackinac island and we would camp out there. He loved to play in the water when we went swimming.

My Special Connection With BAXTER:

When we brought Baxter home from the shelter, he didn't want to be anywhere else but snuggled up in my lap looking out of the window. As the years went on, he would be the one I could cry my heart out to. I could tell him everything, Baxter was my baby.

The last happy moment I had with Baxter was a week before Christmas. I had a Santa hat and I put it on him. He look so cute in it. Baxter would let me dress him up to take pictures of him, he would even pose for the picture.

To BAXTER Across The Rainbow Bridge:

Baby boy, I know you're up there right now, just waiting at the edge of the Rainbow Bridge until the day I come and join you. Until that day my baby, I'll miss you forever and always. I love you.