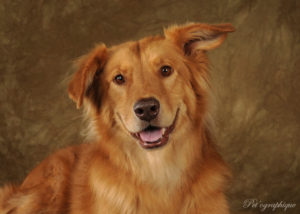 An Angel PawPrint On Kimm's Heart

How I Became DODGER’s Dog Mom:

Dodger came to my home as a foster when his other family had trouble with him and other dogs. He had been found as a stray, being ganged up on by a pack of other strays. His left rear leg was out of joint and hung useless. Dodger would throw it in front of his right rear and run on three legs. A local vet did hip surgery on him.

Dodger eventually became my first agility dog! He was terrible! He dug, chewed, barked and bolted. He had fear aggression with other dogs and with people. But my 6 year old Golden, Kasey, fell in love. Dodger was her “bad boy, boy toy”. I couldn't separate them so I adopted him and adored him. I was a "foster fail".

Dodger didn't have any favorite toys, but he loved his stuffed KONGs.

He loved taking walks and running in the desert. Dodger wasn't good around other dogs or people, so it felt safe for him out there.

My Special Connection With DODGER:

Dodger was fearful of just about everything. It broke my heart. He never warmed up to any dogs other than Kasey. He wasn't good with people either. But once he knew you belonged in our home, you were accepted and part of our little family. Dodger was my heart dog. Writing this has me in tears.

He was healthy and happy. Dodger loved agility and was learning Nosework.

Not long after his 9th birthday, Dodger started limping and was showing pain, which he never did. I took him to the vet and they discovered an infection. And the limping was caused by his shoulder muscle liquefying. They were at a loss to identify the cause of either.

My dear Dodger was fine on a Wednesday and I had to let him go on Monday. He was in terrible pain and the infection was uncontrollable. It was devastating! It happened so quickly that I really didn't have any special last moments with him.

To DODGER Across The Rainbow Bridge:

I have a picture of you and Kasey in my bedroom, so I see you every morning and every night. And I miss you every day. You were such a dear soul. I wish I could have talked with you, so I could have found out why you were so afraid. And to let you know that I will always protect you. But I think you know that Dodger.