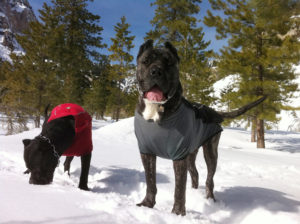 An Angel PawPrint On Maki's Heart

How I Became ATHENA’s Dog Mom:

I saw a picture of her on a breeder’s website and read the description of her temperament and knew I had to have her. Athena arrived at the airport a few days later. When we looked into each others eyes, we were instantly bonded. She spent the next week helping me load a moving van, walking up the ramp and following me everywhere I went. She was so smart! Despite her large size and huge paws, she slept in the bed with me every night. Otherwise Athena would howl, if we weren’t in the same room.

Bones, I had to hold them while she chewed them. She loooooved to chew on bones and she was given a fresh one nearly every day.

A stuffed animal lion, which was “her baby”.  Athena never destroyed it, because she was so gentle. Her lion went with her everywhere, she carried it around by the arm and slept with it.

When it was time to go for a walk, she would hold the leashes of my other dogs in her mouth. It was the only real way she could play with them since she was over 110 lbs and they were only 6 pounds each. She would get excited and run around and put her face on the ground and stick her butt up in the air like she was pretending to be their size. Athena was scared of my 6 lbs Yorkies.

We loved to go hiking, especially if there was a little pond or stream to splash around in. Athena loved to jump in the water and bite it. It was also fun to put on a sweater and play in the snow. Snowballs were a fun thing to chase, even though it was hard to see where they landed. When Athena would stick her face in the snow and bite, she always lifted her head up and chattered her teeth.

My Special Connection With ATHENA:

Athena was my soul mate. We were alike in so many ways and she always knew how to cheer me up. We spent a lot of time together lounging, hiking and hanging out in the back yard. She was the gentlest of giants and helped a lot of people who were scared of large dogs to get past that fear. She was so smart, too smart for her own good, and she was strong.

I wasn’t expecting to have to say goodbye to her so soon, it was sudden. About a month before, a friend of mine made a post about having to let their fur baby cross the Rainbow Bridge and I was devastated. I cried in the backyard and Athena sat in my lap. I thought of how sad I would be and shared my feelings with her. She licked my face and stared into my eyes and just her presence made me feel better. Little did I know that my time with her was coming to an end.

I remember there was a storm the day before I took her to the vet. She loved walking the neighborhood with me in the rain, so out we went. We walked around the neighborhood streets and then sat in the garage as it poured watching the lightning strike. The next morning was warm so I decided to give Athena a bath. Something wasn’t right with her that morning and after her bath, she couldn’t walk.

I picked her up, all 110 pounds of her, and took her to the vet. She was so excited to see her favorite person, Dr. Lewis, but she was sick. Her liver was failing and tumors had developed on nearly every organ. They didn’t know how she was still alive. They sent us to a specialist in emergency care. I laid in the bed of the truck with her on the ride there. I talked to her and told her she was my baby and she was strong and could pull through this.

I didn’t want her to go, I wanted them to say she was going to be OK. She was tired, she was ready to rest. The vet rolled her in on a cart for large dogs and her tail wagged enthusiastically when she saw me. I tried not to cry, but I couldn’t stop the tears from rushing down my face. I just wanted to hold her, touch her, lay with her and take her home.

I rubbed her and held her hand. She curled her tail between her legs and looked so peaceful and beautiful. I stayed in the room crying, talking to her, and holding her hand for a while after. As I got up to leave, I gave her a kiss on the cheek. When I lifted my face from hers, she let out a little sigh and suddenly the room felt brighter.

To ATHENA Across The Rainbow Bridge:

You will always be my pup-pup, the sweetest giant there was. I think about you every day and wonder who you’re playing with. I’m sure Gramma loves playing with her little Annie-baby and I know Papa loves your big paws. I miss your smell, your teeth chatter, your wiggly tail, rubbing your nose, smooshing your floppy lips, and lounging with you in the back yard. Whenever it rains, I think of you. I hope you have an endless supply of bones and stuffed lion babies to carry around. I love you Athena.