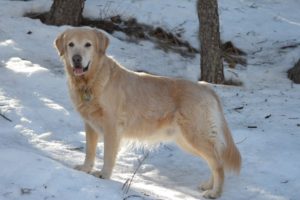 An Angel PawPrint On Ingrid's Heart

How I Became YOHAN’s Dog Mom:

One day in April 2007, I decided to stop by Lied's Animal Shelter. I do that now and then but always feel so sorry for the animals there, especially the dogs. This particular day, I found Yohan. He was just sitting there, without barking, looking at me with his sad eyes. My heart skipped a beat and I fell in love with him right away.

We had not planned on getting a new dog, since we already had a golden retriever and a lab. But I drove straight home and managed to convince my husband to come with me the following day to take a look at him. I guess he must have fallen in love with Yohan too, since we all went home together that day!

His favorite toys were our socks. Old, new clean or dirty, it didn't matter. He'd always carry a sock in his mouth. Yohan would get distracted if he couldn't find one and run around the house looking everywhere. If he couldn’t find one, we'd have to find one for him. He never ruined them, just held them in his mouth. Yohan was well-known among family, friends and acquaintances to always carry a sock around and everybody thought it was so cute!

He loved camping, hiking and being outdoors. But even though he was a golden/lab mix, Yohan did not like the water. A few months before he crossed the Rainbow Bridge, it was a warm day at Cottonwood Cove. He got in the water all the way up past his chest, but didn't swim. Yohan also loved playing in the snow at Mt. Charleston.

The last two years of his life, he was a therapy dog and we would go to Child Haven once a week, which Yohan enjoyed. But mostly he enjoyed just being with his family members.

We also started a “Reading With Rover” program at my daughter's school together with their counselor. Yohan was great and enjoyed it so much. He would just lie there and listen to the kids reading. He liked being petted and even gave some of the kids’ kisses.

My Special Connection With YOHAN:

He was just mine and mine alone. He would always be with me in whichever room I was and not with the other family members. Yohan would look at me with those eyes I remembered from my very first meeting. But now his eyes were filled with love and trust instead of sadness.

When we were out walking or hiking, he would walk right next to me. Yohan was not tempted to run around chasing rabbits and chipmunks like the others did.

He was also so sweet towards other human beings, so gentle and trusting. He was funny in many ways. Yohan would only drink water from a bowl that he recognized, so in the dog park, he would not drink from the same as everyone else.

Yohan had arthritis since he was young and had been on anti-inflammatory medication on and off for several years. The last time we put him on them, they did not help. Our veterinarian suggested we should do an x-ray, but instead of finding something wrong with his leg, she found cancer. And it had spread to his lungs.

We all thought it was strange since we had not noticed anything. But up until that time, he had been almost the same. Yohan had been eating a little less, but I thought it was because he was getting older and the summer and fall had been hot.

After the diagnosis, he quickly became sicker and 3 weeks later he died. The night before his death, I had said to the kids that I would take him to the vet the following day to end his suffering. I could tell he was feeling worse than ever and the sad look in his eyes had come back.

When I woke up in the morning, Yohan wouldn't move. He had died in his sleep. How I regret that I wasn't with him the whole night. But it looked like he had gone to sleep peacefully.

To YOHAN Across The Rainbow Bridge:

I love you Yohan and I miss you so much. All of us do. You spread so much happiness to whomever you met. You were the best! We have another dog now, Sunny. He will never replace you, but he has sort of taken your spot. I often think of you.