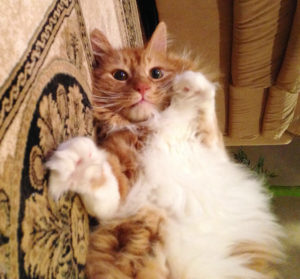 An Angel PawPrint On Sean's Heart

How I Became KATCZINSKY’s Cat Dad:

I found him at the ASPCA. Katczinsky was a beautiful cat and he instantly caught my eyes.

He had a few toys that he loved. Katczinsky had a couple toy mice, which I would throw. He would jump up and bat them in the air or chase after them. And then after catching them, Katczinsky would usually take them to his water dish and drown them.

Though Q-tips are not a toy, they would drive him crazy. Katczinsky loved his Q-tips. He never really bit the ends off of them. He would just bat them all over my room and take them downstairs to his water dish...and you get the idea, Katczinsky would drown them too.

Lasers would get him wild. He would run for minutes on end, never being able to catch the dot of red light. It was a great exercise for Katczinsky.

I also enjoyed playing hide and seek with him. I would stick my head around the corner and watch him try to pounce on me. Then at the last moment Katczinsky would jump out at me. And sometimes he would come running out from under the coffee table and jump up at me, while trying to hit me with his two front paws and then quickly run away. It was like we were playing tag with each other.

Katczinsky was an indoor cat. We spent a lot of time together.

My Special Connection With KATCZINSKY:

He helped me through a lot of personal pain in my life. Katczinsky would snuggle with me when I had a migraine to ease my pain. He was also there for me when my mom died and his presence and purring really helped to comfort me.

I went to the vet's office and held him before he crossed the Rainbow Bridge. It was so hard to say good bye.

To KATCZINSKY Across The Rainbow Bridge:

You were a good cat buddy! You brought a lot of joy in my life and I will really miss you! You will be always in my heart...