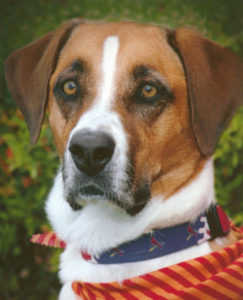 An Angel PawPrint On Denise's Heart

How I Became SCAMP’s Dog Mom:

We went to the shelter looking for another dog that I saw on TV. She was no longer there. As we were leaving, we saw another dog in an exercise yard with his head in a volunteer's lap. I went to meet him while my husband Frank went to fill out some paperwork.

When Frank came out, he asked what I thought. I said I already named him. Scamp was neutered that day and came home the next. He was the dog of my heart and I will never get over losing him.

Scamp loved playing touch football with his dad. He loved playing tug of war and also got a kick out of taking the lids off of water bottles. Scamp had his "sleeping bear",  which we still have.

We took many trips with Scamp. Several times, we stayed at the Cypress Inn in Carmel, CA. And we took three road trips to St. Louis to visit his grandparents and also to Oceanside, which is where we adopted him. Mount Charleston here in Vegas was a favorite too. Scamp was a great traveler.

My Special Connection With SCAMP:

His dad was an airline pilot and was gone 21 days out of the month. Scamp was my best buddy. My confidante. My sleeping buddy. My love. We spent so much time together. Scamp watched out for me through my illnesses.

Scamp developed a very aggressive form of cancer. If we had not done anything, Scamp would have been gone in a matter of weeks. But we caught it early enough so that the doctors, our vet and Scamp's oncologist, thought that an amputation would give him a couple of years. We did the surgery, but Scamp had a tough recovery.

The following Tuesday we were getting ready to take Scamp in to get his drains pulled. Before we went, I laid on the floor with him and he put his head on my chest. I told him I knew he was trying so hard to get better for me, but I understood if he had to go. I told Scamp I would miss him and I would always love him and he would never let me down. Scamp was in the back seat of the car with me.

The trash truck came by and Scamp did what he loved to do, he barked at the trash truck. Then Scamp gasped and fell over and died in my arms. He got a blood clot and his heart stopped.

My brother was driving and we rushed Scamp to the doctor, but I knew before we got there that I had lost my baby. My heart will never fully heal from that.

To SCAMP Across The Rainbow Bridge:

You are my baby boy. Your younger brothers and sister have heard all about you. You are never far from my thoughts, Scamper Doodle. Mama will always love you very much and I miss you more than I could ever describe. You will always be my baby and my heart. I know that I will see you again someday and that it will be the best day ever. Please stay by Grandma and wait for me. It has been over eight years and I cannot write this without sobbing. Mama loves you baby boy.