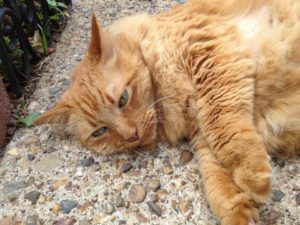 An Angel PawPrint On Tammy's Heart

How I Became TIGGER’s Cat Mom:

Tigger was rescued from Loop 323 in May of 2000 as a tiny little baby. He stopped three lanes of traffic during Sunday Brunch hour.

I stood in one lane blocking him from going across to the oncoming traffic. Tigger jumped on a muffler of a stopped Blazer SUV. The driver reached under and grabbed him by the tail, of course Tigger scratched and bit him. So the guy tossed him to me. That is where his story began.

Walter, my husband, told me to get in our truck and we headed to his mom's place. I loosened my grip on the tiny cat to see how badly he was injured. When I did, Tigger escaped and climbed under the dash. Walter had to take the dash apart to get him out from the AC duct. He was sleeping soundly in there.

Tigger's pads and whiskers were burnt from the muffler. We put him down in front yard to see if he would eat or drink. The little toot took off to the back yard, where the 150 lbs Rottweiler and two other large dogs were.We captured Tigger again.

We did not know what we were going to do with him, as we had a Chow Chow that did not like small furry things. We kept Tigger in a bathroom while we looked for another home.

A week later, Walter came home with matching bowls and a special food. I knew Tigger was staying. With slow introductions, the Chow Chow and the others accepted Tigger. They became his protector and playmate.

Tigger had fuzzy mice all over the house. He loved to play with the dogs. Tigger would stand on their backs and give massages. He also loved all boxes and bowls that he could stuff himself into.

Tigger loved Christmas! He took down a tree or two during his time. He would always climb to the top and try to make a bed.

Tigger thought he was a dog and would go out in the backyard with us. He would always supervise when we were doing yard work. He liked to watch the Koi fish in the pond.

My Special Connection With TIGGER:

Tigger was a very affectionate tiny guy that would sleep on our necks with his motor running like a helicopter. We would wake up and his nose would be stuck in our nostrils.

We rescue and re-home other dogs and cats. Tigger would always train the puppies to respect kitties. He would play gently with them, but would not allow them to be rough. It always helped the boost the puppies bios being able to state that they were good with cats.

Tigger was diagnosed with kidney failure and we did Sub Q fluids for 7 years. It kept him healthy and comfortable. We lost him due to kidney failure and it broke our hearts. We knew we had done everything above and beyond for him. Throughout the years, his vets were always amazed at how well he looked after reviewing his labs.

Tigger was not feeling very well at all. After giving him extra fluids and he didn't respond like usual, I took him to the vet. They were planning to do IV fluids and run blood work to check his status.  Tigger decided he was tired. He went out on his terms, just as he lived his life.

To TIGGER Across The Rainbow Bridge:

God Bless our sweet boy and we will see you at the Rainbow Bridge with your other brothers and sisters.